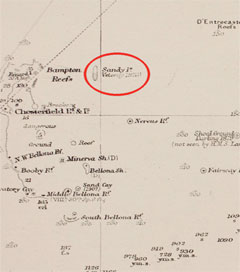 Pictorial librarian at Auckland Museum Shaun Higgins has identified the origin of a cartographic error, as a 19th-century whaling ship, which first ‘spotted’ the non-existent Sandy Island in 1876. It was a remarkable story: the “undiscovery” of a Pacific island which had made its way on to navigational charts and even Google Earth. Last week a group of Australian scientists announced they had sailed to the spot where Sandy Island is supposed to be, in the shimmering Coral Sea, only to discover it wasn’t there. Higgins has identified the source of the original error: a 19th-century whaling ship. He said: “From the information we have, it appears as if the island was sighted (or at least they saw fit to record something hazardous) with no further investigation.”