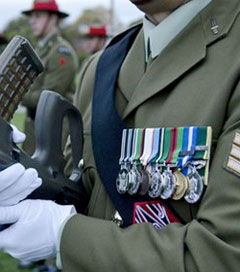 Convoluted Defence History with US Vestige of the Past

The difficult period of New Zealand-US defence relations “is now seen as a relic” according to American Thawley Scholar Jack Georgieff, with “the best in bilateral defense relations” yet to come. “Chuck Hagel raised eyebrows among strategic observers at the annual Shangri-La Dialogue on 1 June, when categorised the US relationship with New Zealand alongside somewhat more complicated ties such as Vietnam and Myanmar,” Georgieff writes for The Diplomat. “Sam Roggeveen at the  made note of this ‘snub’ and Joshua Keating at Foreign Policy also mentioned it, while pointing out (correctly) that New Zealand-US defence relations do have a rather convoluted history. Relations cooled significantly some decades ago over New Zealand’s legislative blanket ban on nuclear powered or nuclear weapons-capable naval vessels in 1985. [Mid-May] saw several hundred delegates from across the United States and New Zealand gather in Washington for the bi-annual New Zealand-US Pacific Partnership Forum. This medium, organized by the US-NZ Council, has been instrumental in helping to normalise relations between the two countries. The forum was open to the public and on the record for the first time since its inception in 2006, and spanned the full extent of the relationship: business, trade, and security. A plenary high-level security panel illustrated where the relationship now stands, and where it can go from here. Most conspicuously, a return to the alliance in the future was mooted as a possibility, but not universally endorsed by the panel. The broad consensus called for both sides to emphasise a broadening and deepening of the security partnership, which has been thawing since 2006. New Zealand’s Chief of Defence, Lieutenant General Rhys Jones, contended that the US needs a partner that can compete in the Pacific in the context of the rebalancing. Issues of cooperation and collaboration would mainly encompass human security and humanitarian issues: an area where New Zealand has long taken a leading regional role. Wellington and Washington should continue to engage at the margins on what can be done to get around the nuclear issue. It may be a relic, but it is not a buried relic. New Zealand and the United States may now be allies in all but name. But making it official once more should not be taken off the table in the years ahead.”