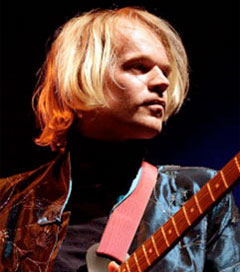 Currently, he’s living in Whalley Range, Manchester, a place he has no connection to other than his manager is based there.

He gained some initial notoriety when he arrived in London from New Zealand in 2006 with his band Connan And The Mockasins, the name deriving from his talent for making moccasins out of dirt bike tyres and sheepskin. He was courted by a number of labels.

He walked away from the waving cheque books back to his hometown of Te Awanga, a tiny place on the coast of North Island with vineyards and no shops. His mum then persuaded him to put out Forever Dolphin Love in 2011. “It was never meant to be released,” he reveals. “It was just me being silly, really, and Mum forced me to do it.” Thanks to Mama Mockasin’s persistence, he gained musician fans such as Radiohead (who invited him to support them on a tour of Australia and New Zealand), Beck, Beach House, Tyler, the Creator, and Charlotte Gainsbourg, who is now a friend and collaborator.

He’s about to follow up Forever Dolphin Love with a new album called Caramel, this one having been made on purpose. “I wanted to make something simple. Something nice and relaxed. I liked the name.”

Caramel is out 4 November.