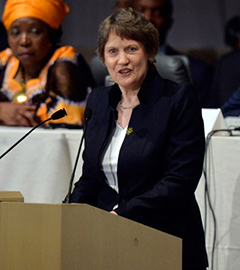 Introducing UN Secretary General … Helen Clark? The Guardian is tipping the former prime minister is the prime candidate to replace incumbent Ban Ki-Moon when he steps down in two years. Clark was New Zealand’s first elected female prime minister, serving three consecutive terms, and is now in her second term as the most powerful woman at the UN, writes Jane Martinson.

“She could well become the first woman to lead the organisation,” she writes. “Clark has many points in her favour, not least her current job and the fact that New Zealand is part of the amusingly named Weog group (Western Europe and Other Group).”

Ki-Moon is in his second term and recent UN history suggests two terms is the standard period of service for the modern secretary general. There have been two previous Asia-Pacific heads, including Ki-Moon, two from Africa, one from Latin America and the Caribbean and four from Western Europe and other Group. The last Weog secretary general was Kurt Waldheim, whose connections to the Nazi Party caused controversy.

Clark was in London on route to Davos, what the Guardian describes as the “alpine schmoozefest for powerbrokers”, when she spoke to Martinson in a wide ranging interview that concentrated on the institutional sexism women face in the job.

Mortensen raises Julia Gillard’s denunciation of misogyny in the Australian Parliament, which elicits this response from Clark: “Many women around the world saw this as incredible – but how did it play in Australia?” Gillard, of course, was ousted by her own party.

As for her own time in the job, Clark tells the Guardian that gender-based criticism went with the job.

The top UN job is clearly in her sights but this is a career politician, who has this to say about her prospects: “There will be interest in whether the UN will have a first woman because they’re looking like the last bastion, as it were. If there’s enough support for the style of leadership that I have, it will be interesting.”