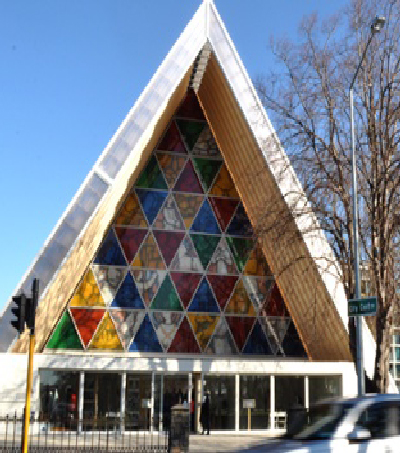 Christchurch’s Transitional Cathedral, known as the ‘cardboard cathedral’, has ‘risen from the ruins’ to become the most recognised building in Christchurch, while ChristChurch Cathedral remains gripped in a battle between modernity and heritage.

The ChristChurch Cathedral, once the epicentre of the city and its namesake, has sat unused and embroiled in legal battles. It is cordoned off, much of it hidden by large containers stacked up to protect the public in case of another shake.

But still it is a tourist attraction and still, for a different reason, likely Christchurch’s most photographed building. Once it housed concerts and meetings and, of course, religious ceremonies. Now it houses pigeons.

“It was part of the city. It is even the symbol of the city council,” says Caroline Izzo, a conservator in charge of restoring the dome of Christchurch’s historic Isaac Royal Theatre.  “What is Christchurch without its church?”

Many other significant buildings have been lost – either deemed too unsafe or too expensive to repair.

Izzo was surprised to find that after the earthquake the Anglican Diocese wanted to “deconstruct” the cathedral rather than repair it. In its place the church envisages a modern building. That decision has been met with legal challenges from those who see the cathedral’s place in Christchurch as representing more than just stone and mortar.

The Anglican diocese has already spent £2m on a new Transitional Cathedral which has been hailed by some as the most important building to be built in New Zealand for many years.

“Internationally it is the most recognised building in the country,” says Andrew Barrie, professor of architecture at Auckland University.

Due to its building materials the structure has become known as the “cardboard cathedral”. It was created by Shigeru Ban who this year won architecture’s grandest award – the Pritzker Prize.

Part of the importance of the Transitional Cathedral, Barrie says, was that it is the first non-commercial structure to be built in the city centre after the earthquakes.  The cathedral is built to 130% of the current earthquake standard, and is designed to last for 50 years.

However, some would rather see the original ChristChurch Cathedral restored, not only to honour its architectural significance but also its place in the founding of the city.

The rebuild of Christchurch is slow with the dominant feature being piles of rubble and empty lots rather than gleaming new buildings. Barrie believes the Transitional Cathedral shows that amid all the bureaucracy associated with recreating a city, progress is being made.

He says the ruined cathedral has come to represent the earthquake itself: “The cardboard cathedral is a symbol of moving on.” So while a fully intact stone cathedral still remains on the city council’s letter head and the top image in a Google search, there are signs of a city doing just that.