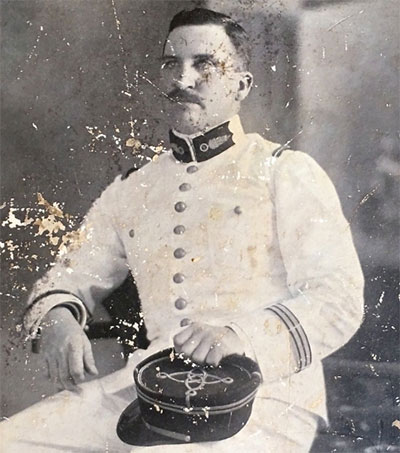 A new exhibition marking the Somme Centenary called “Médaillé Extraordinaire” aims to raise awareness of James Waddell, a much decorated New Zealander who served in the French Foreign Legion during the First World War.

Lieutenant-Colonel Waddell, a veteran of the battlefields of Gallipoli, the Somme, Champagne and Verdun, was awarded the Croix de Guerre with seven palms, and made a Commander of the Legion of Honour.

Yet his exploits weren’t widely remembered until efforts in recent years to bring them back to public attention in both New Zealand and France.

“The story of James Waddell is fascinating for so many reasons, and it’s one we in both countries should know more about,” New Zealander Jasmine Millet, curator of the Médaillé Extraordinaire exhibition says.

The event opened in the Picardy village of Belloy-en-Santerre on 4 July, the 100th anniversary of an attack by the French Foreign Legion during the initial days of the Battle of the Somme in 1916.

Millet comments: “I think his military achievements make him one of New Zealand’s most important military figures but Waddell also had the most unusual personal life, which explains how a working class boy from the bottom of the world wound up as an officer in the Foreign Legion.”

Waddell was born in Cromwell in 1873 and was the first New Zealander to pass the British Army entrance exam. “He began his military career serving in South Africa, but was persecuted for his colonial origins and slight frame,” as reported on Stuff.co.nz.

When his regiment was transferred to India, the New Zealander met and married a French woman – Blanche Prud’homme. It was her connections that “allowed him to enter the French Foreign Legion in 1902.”

His career with the Legion spanned 20 years, including the Great War.

Médaillé Extraordinaire will be displayed in Belloy-en-Santerre until the end of August, after which it will travel around the Santerre region of the Somme.