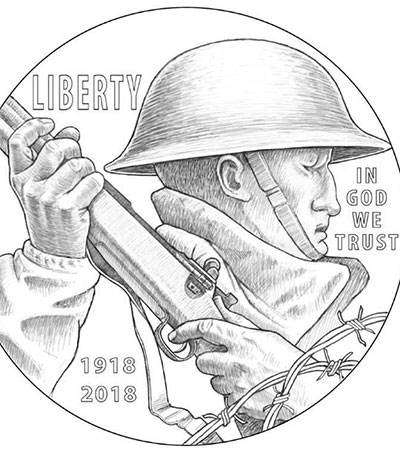 New Zealand-born sculptor LeRoy Transfield’s winning design for a collectible silver dollar commemorating all Americans who served in the First World War has been unveiled.

Available to buy from January 2018, sales of the centennial coin will help to fund the creation of the new National World War I Memorial in Pershing Park, Washington DC.

The face of the new coin, entitled ‘Soldier’s Charge’, depicts an almost stone-like soldier gripping a rifle. Barbed wire twines feature in the lower right hand side, a motif continues on the reverse with poppies among loops in the wire.

“This coin honours all the 4.7 million American men and women from the Navy, the Marine Corps, the Coast Guard, the Air Services, and from the Army, who stepped forward to serve 100 years ago,” said Ryan McCarthy, acting secretary of the Army, at the unveiling in Washington on 9 October.

Following bi-partisan backing for the coin in Congress, an open design competition was held by US Mint in 2016.

Transfield, who lives in Utah, received his Bachelor of Fine Arts from BYU-Hawaii in 1993.