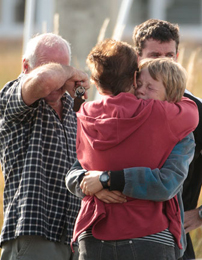 New Zealand is in mourning following a fiery hot air balloon crash in the Wairarapa that left eleven people dead. The tragedy occurred when the balloon came entangled in power lines, causing the basket to set alight. Two of the passengers jumped from the balloon, causing it to rise quickly before plummeting to the ground. Pilot Lance Hopping — a man described as experienced and safety conscious — was killed in the accident along with all ten passengers on board. Family members of the victims were among those who witnessed the tragedy. “This is a huge national, significant event – it’s a tragedy as bad as tragedies get,” local police area commander Brent Register said. The circumstances of the tragedy are still being investigated, however a report in the New Zealand Herald says that a power line like that involved in the incident could generate heat greater the 2,000 degrees Celsius. “It’s a shock,” says Carterton Mayor Ron Mark. “I have a deep sense of sadness for the victims and their families, and those who witnessed it firsthand — it’s quite a horrific thing.”