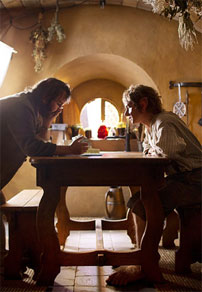 Wellington will be the site of the world premiere for The Hobbit: An Unexpected Journey in November 2012. “I think Warner Bros. in particular were blown away by [The Lord of the Rings:] Return of the King premiere,” Jackson said recently from the Hobbiton set in Waikato. “No one in the international industry could quite believe how the country got behind that.” Warner Bros. has set 14 December 2012 for the release of the first of the two Hobbit movies. Jackson began shooting the two films in New Zealand in 3D in mid-March with a cast including Martin Freeman as Bilbo Baggins and Andy Serkis, Elijah Wood, Ian McKellen and Cate Blanchett reprising their roles from The Lord of the Rings trilogy. The screenplays are penned by Fran Walsh, Philippa Boyens, Guillermo del Toro and Peter Jackson.