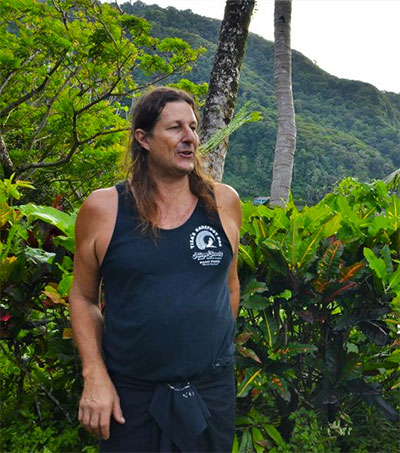 In Alega, American Samoa some delicious banana varieties are getting harder to find. A New Zealander, known only as Candyman, collects the fruit. Acquiring a new one can be as simple as trading with the farmers next door. “I’ll be driving down the road and see a banana that I don’t have, and I’ll turn the truck right around,” he says.

Sometimes, it’s a matter of figuring out if what one farmer calls a “boiler” is really different from what another farmer calls the “goldenfinger”. When one plantation owner went to prison for assaulting a would-be banana thief with a machete, Candyman had to wait until the farmer returned from his five-year sentence to politely request an offshoot of his famed Misiluki banana.

“I found a survey conducted of the territory from the early 1900s that identified 35 different types of bananas,” Candyman says. To date, he has tracked down and cultivated 22 of those varieties on the volcanic hillside plantations he and his wife Tisa Faamuli manage above Alega Bay. He hopes to find all 35.

Of all his fruits, Candyman holds the little orange Soa’a in highest esteem. “The orange bananas I fell in love with because of the way they grew, the way they looked,” he says. “It took a long time to work out how to plant them. The pigs liked them, and the coconut crabs liked them, so I thought, there must be something good about those bananas.”

Though he often waxes about nutrients and economics, Candyman’s plantations are ultimately the work of an exacting collector and archivist – a historical and culinary labour of love. “Most of the big banana plantations are out towards Leone, where the ground is more flat,” explains Candyman as he glides up the 50-degree incline of his Soa’a plantation, supported by his bare feet and a worn machete. “They grow four or five types for market.”

In 1994, Candyman came to Alega with a New Zealand contractor to install a water main. He met Tisa, who found him real sweet. She called him her “candyman,” and he’s been publicly known as such ever since. Candyman rigorously studied Samoan culture, agriculture, food, and language alongside Tisa’s father.

All Blacks lock Andy Haden, who “was an exceptionally talented, intelligent and resilient lock, among the best in the world in his era,” has died in Auckland, aged 69. The Japan…