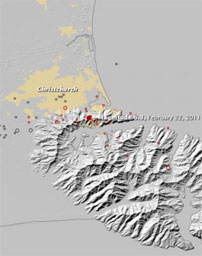 “Newly uncovered details about the earthquake that rocked Christchurch in February may offer grim lessons regarding the potential threat of fault lines running through urban centres,” Our Amazing Planet contributor Charles Choi writes. “Much of the damage came from a phenomenon called liquefaction, where soils are shaken and begin to behave as a liquid, undermining buildings and other structures. ‘Compared to the earthquake that destroyed much of Haiti, the scale of disaster in Christchurch may seem small,’ University of North Carolina geoscientist and editor-in-chief of Seismological Research Letters Jonathan Lees said. ‘Christchurch, however, was constructed using much better technology and engineering practices, raising a very sobering alarm to other major, high density western urban centres.’ Research structural engineer and manager of the National Strong Motion Network with the US Geological Survey Erol Kalkan said: ‘The most important lesson may be to avoid construction on soft soils where liquefaction is a problem.’”