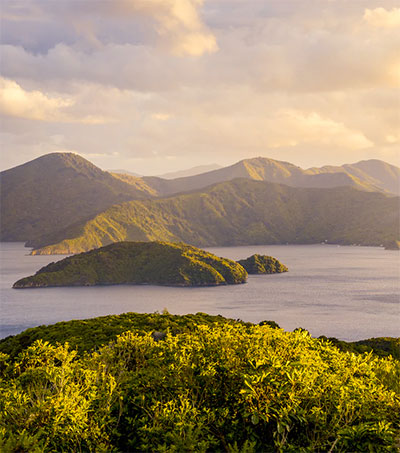 Throughout British actress Jenny Agutter’s career, she writes in an article for the Telegraph that she has been “fortunate enough to be transported through time – whether to post-war Britain and the Sixties in Call the Midwife, or travelling back to Victorian times with The Railway Children. I have enjoyed acting in historical dramas, but I’ve always believed that these worlds no longer existed. Until my husband John Tham and I visited New Zealand.”

“There is a lovely old-worldliness to the place, which is charming without being old-fashioned. And it would be wrong to say that the country is behind the times. We found ourselves in a world full of surprises where we made new friends, discovered stunning landscapes, ate exceptional food and drank world-class wine,” Agutter writes.

“Our journey had started at the Bay of Many Coves, a lodge that could only be reached by boat. It is in the Marlborough Sounds, in the north-easterly corner of the country’s South Island and is a maze of channels and waterways created when the sea inundated and flooded an ancient river system. On a recce of the surrounding area, I clambered up a challenging trail to the top of the hills through ferns and bush forest and was rewarded with spectacular views across the bays.

“For a few days, we were away from roads; we would walk the many trails or take kayaks and meander along the coast. After this period of complete quiet and relaxation, we were ready to start our exploration by car. New Zealand’s South Island is as dramatic as it is diverse.”

Tags: Bay of Many Coves Resort  Marlborough Sounds  Telegraph (The)