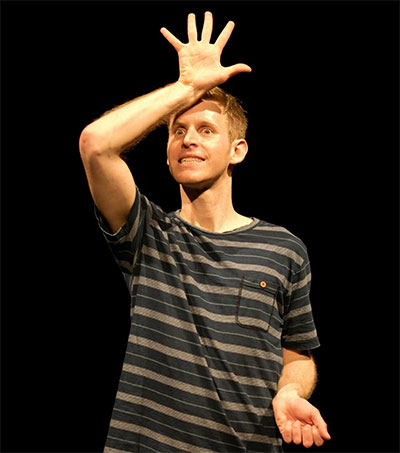 Brad McCormick Takes His Kids Show on the Road

New Zealand-born writer and performer Brad McCormick is taking his production of Sammy and the Snow Leopard, under the auspices of the ground-breaking children’s theatre company Travelling Light, to the North-East of the UK for the first time.

For over 30 years, Travelling Light has created exciting and inspiring theatre for and with young people from its base in Bristol.

Sammy and the Snow Leopard is the brain-child of McCormick who is now based in Newcastle.

He told the Northern Echo: “The idea for Sammy and the Snow Leopard came to me literally as I was watching an advertisement for the ‘Adopt a Snow Leopard’ charity programme. And after the initial thought of ‘wouldn’t it be funny if …’ I realised that there could be a show in it.

“The premise behind the piece is that Sammy loves animals but his mother won’t let him have any in the house. When he hears about the Adopt a Snow Leopard scheme he reckons he’s found the perfect way to have a pet. But then a parcel arrives and Sammy finds himself on a crazy adventure involving stuffed animals, evil neighbours, school projects and limes.

“This is a dynamic blend of physically comedic storytelling, audience interaction and brilliant new music for young audiences from 5 to 10 years.”