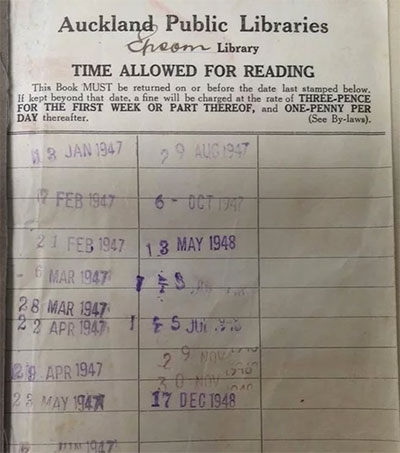 A woman has brought back Myths and Legends of Maoriland by AW Reed to an Auckland library 67 years after it was due to be returned.

The book was checked out by a girl in 1948 and not seen again. But last week a woman returned the book to a startled librarian at Epsom Library and asked how much her late fines would be for returning the book 24,605 days past its due date.

“She told me she had checked out the book as a child and been meaning to return it for years,” librarian Zoe Cornelius said.

“She seemed a bit embarrassed but I was pleased because she said she had read and enjoyed the book many times over the decades and that made me happy – that the book had been in a good home and loved.”

The woman would not incur any late fees, said Cornelius, as she was a child when the book was checked out and children were not charged late fines at the library.

An original checkout slip on the back of the book states that fines for overdue books would be charged at three pence for the first week, and one penny a day for every day following.

If the borrower had been an adult her overdue fines at today’s rates of $1 a day would have amounted to $24,605.

Cornelius said it was likely the returned book would end up in the library’s special collections section.