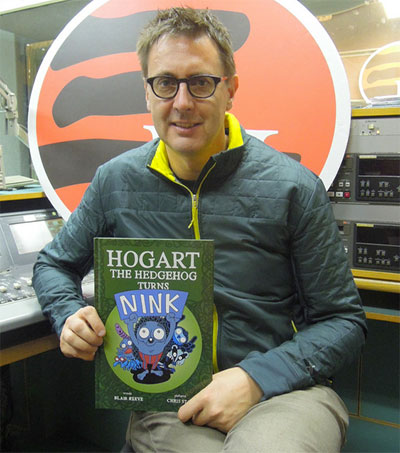 Hong Kong-based New Zealander Blair Reeve, who mentors students at Chinese University in creative writing, has just published children’s book Hogart the Hedgehog Turns Nink, “an enormously fun book, and a gratifying one to read aloud,” according to Time Out reviewer Nick Ascroft.

“The best picture books reward on multiple levels and consider both the adult slavishly reciting the story and the youngster hopefully drifting off into sleep as the last pages flutter by,” Ascroft writes. “Ideally, both child and adult should delight in the pictures, the story and the music of the words (especially if, as in this case, the story is told in rhyming verse). Hogart the Hedgehog ticks all these boxes.

“The tale is well told. Hogart awakes on his birthday and his family realise they don’t know how old he is because no hedgehog has ever lived longer than the number of toes on their feet (eight). Kids are pleased to know better than the main character, calling out proudly, ‘It’s nine! Nine!’ Nonetheless, the party is cancelled and the quest begins.

“The story’s quite lovely verse form, three rhymes in a row, in stanzas of six lines, makes the book incredibly fun to read. Few rhyming children’s books pull the feat off quite so well as this. Getting to the end of the book, having read it aloud, one feels like there should be some applause for the performance.

“Hogart the Hedgehog Turns Nink is a classic. The art, story and poetry of it are symphonic. It’s also classic in the sense of not patronising a young reader’s vocabulary. None of the meaning will escape any child and we applaud Reeve for the ‘verve’.”

Reeve has lived in Hong Kong since 2008. He holds an MFA in Creative Writing from the City University of Hong Kong and a degree in Japanese and English Literature.