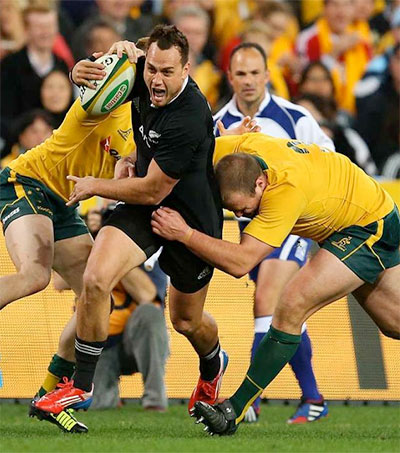 In a gritty encounter played out in a Sydney rainstorm, Australia held New Zealand to a 12-12 draw in their Rugby Championship opener to prevent the All Blacks from claiming a world record 18th consecutive win.

Aaron Cruden scored all of New Zealand’s points with four penalty kicks of his own as the world champions came up short of a win for the first time in the three years of the Rugby Championship.

The draw means New Zealand continue to share the record of 17 consecutive victories by a top tier nation with the 1965-69 All Blacks and South Africa side of 1997-98.

“It is an improvement, we are improving in the last four games but it feels like a loss, considering we got so close and we had a chance to win it at the end,” Australia skipper Michael Hooper said.

The teeming rain was always going to make for a poor spectacle and the first half was certainly not one for the fan of free-flowing attacking rugby.

All Black captain Ritchie McCaw said: “I guess one thing is we get another crack next week, so it will certainly keep some edge on during training.”

The All Blacks meet the Wallabies on home turf in Auckland on 23 August.