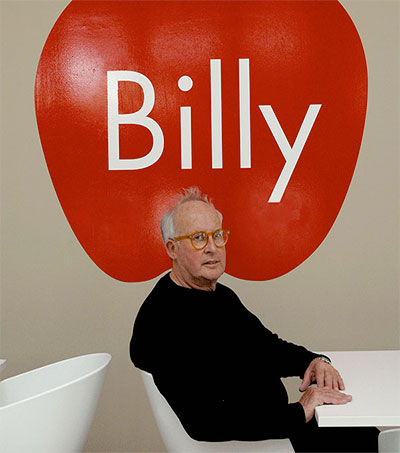 Ahead of Billy Apple’s 2015 retrospective exhibition Billy Apple®: The Artist Has to Live Like Everybody Else at Auckland Art Gallery, arts publication Yareah Magazine looks back at the life of New Zealand’s most significant conceptual artist.

“Apple was ‘born’ in London in 1962, the same year he graduated from Royal College of Art (RCA), when the 26-year-old artist changed his name and bleached his hair.

“By reinventing himself, Apple sought to establish a new relationship between the artist and everyday life by exploring how he could be redefined as a ‘product’ with his own distinct brand. This was his unique contribution to the emerging pop art scene in London where a new generation of artists were redirecting their attention to the burgeoning world of consumer commodities.

“Apple’s contemporaries include British pop artist David Hockney, friend and fellow student at the RCA, and the late American artist Andy Warhol, with whom he exhibited in the pivotal pop art exhibition, American Supermarket, in New York, 1964. This is considered the first art installation and introduced pop art to the masses.

“‘Apple is an artist of and for our times,’ says the exhibition’s curator Christina Barton. ‘He tests how art and the artist can perform under the influence of consumer capitalism in an era of ever-advancing technologies.’

“With more than 150 artworks, the exhibition is the largest presentation of work by the celebrated Auckland-born artist.”

Apple is included in the Walker Art Center’s major survey of pop art opening in Minneapolis in April 2015.

Billy Apple®: The Artist Has to Live Like Everybody Else opens at Auckland Art Gallery Toi o Tamaki on 14 March 2015 and runs until 21 June 2015.