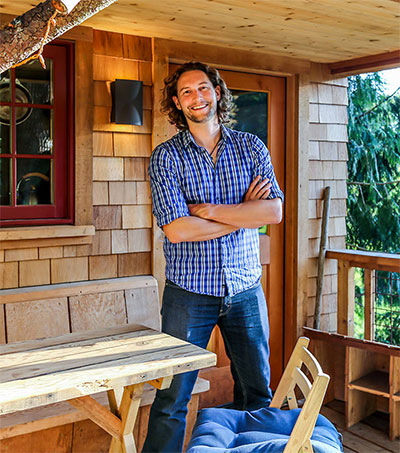 Some call them small homes, while others prefer ‘tiny homes’ or ‘tiny houses’. Whatever the terminology, more and more people are getting their heads around the idea of creating living spaces that depart significantly from the consumption-oriented large-footprint model that has been considered the norm in recent decades. Online videos, like those produced and hosted by New Zealand’s Bryce Langston (whose Living Big In A Tiny House has become a highly popular YouTube channel) have provided examples of enterprising tiny home-owners and DIY builders around the world, helping to accelerate interest at an exponential gallop.

On British Columbia’s Lower Mainland, the highly successful Westcoast Small Home Expo, currently scheduled to return for a second year at the Abbotsford Tradex on the weekend of 6-7 June – again with Langston as one of the headline guest speakers – provides ample evidence of that interest on a Canadian level, Alex Browne writes for the North Delta Reporter.

Tiny home experts and professional builders provide one of the most attention-getting components of the show – including a construction zone feature, where a ‘live-build’ of a tiny home will take place through both days of the expo.

A tiny home is generally defined as a residence of no more than 400 square feet, usually built on a flat-bed base for relatively easy transportation when towed by a truck, with a maximum width of eight-feet six-inches (anything wider makes special moving permits mandatory).

Lower areas of the typical tiny home strike a balance between kitchen, living room and bathroom areas, while beds are usually located in low-ceiling lofts accessed by ladders or stairways.

Langston – who compares Auckland’s tough housing market with Vancouver’s – said following last year’s expo that it was a very real issue for him, as a young actor who had gone back to auditioning for roles after his character was written out of a major television series.

“I began to realise that a tiny home was one of the only chances a young person like me would have to own their own home,” Langston said.

It’s clear that many others feel the same way. The Living Big In A Tiny House channel has 2.9 million subscriptions, with untold further millions of unsubscribed viewers – while for Langston and his partner Rasa, shooting and editing segments around the world has turned into a full-time occupation.