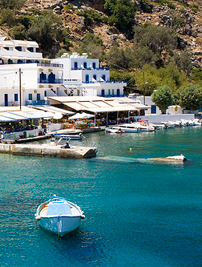 Back to the Island of Crete

No guns were firing when the New Zealand Herald’s Jim Eagles assembled quietly at the bottom of the steep road to the hilltop village of Galatas on the storied island of Crete. “Seventy years before, when one of the most distinguished actions in New Zealand military history took place up this very street, the air would have been thick with smoke and shrapnel,” Eagles describes. “Of course there were no battle-hardened Nazi troops waiting for us at the top but rather the warm hospitality of the local Cretans who have never forgotten the bond forged between them and the New Zealand soldiers during the dark days of World War II. I was on Crete on a pilgrimage seeking insights into what happened here in May 1941, trying to get a feel for the unfolding of this battle which looms almost as large in our history as Gallipoli. It was all deeply moving and I spent quite a bit of the time with suspiciously sparkly eyes.”