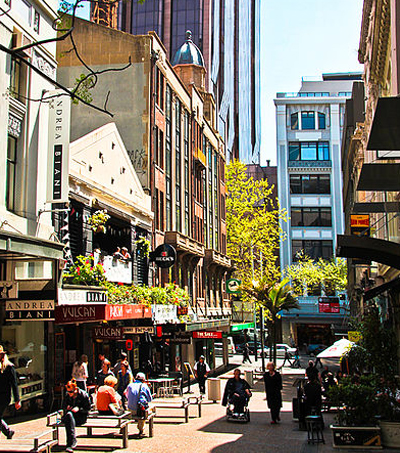 Auckland: The Economics of Shared Streets

“The obsession with self-driving cars and dockless cycles means pedestrians are often overlooked. But if we fail to accommodate those on foot, we ignore an essential part of what makes a city great,” writes Laura Laker in an article in The Guardian that examines seven different cities’ approach to walkability. Auckland is one of the cities.

“Pedestrians haven’t been put at the heart of cities,” said Skye Duncan of the National Association of City Transportation Officials.

“Notoriously car-centric Auckland in New Zealand recently published a report showing pedestrians as the most economically important transport mode in the city. They estimated that policies which put people off walking on Queen Street, a major shopping area, cost NZ$11.7m (£5.9m) a year,” writes Laker.

“Shared areas were created in and around Fort Street, a mixed commercial and residential area in the central business district. The city replaced car parking on some streets with trees and outdoor seating, and removed bollards and kerbs that had separated cars from pedestrians. The moves created more space for open-air activities, and made clear accessible routes for the visually impaired.”

“This new pedestrian network, at a cost of NZ$23m, increased pedestrian volumes by 54% and consumer spending by 47%. Meanwhile, the number of vehicles fell by 25% – and 80% said they felt safer in the area.”