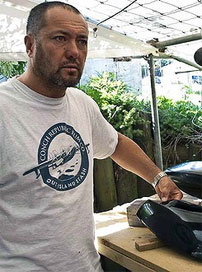 Art the Lifeblood on Waiheke

“‘There’s something about this stretch of water that changes everything,’ sculptor Chris Bailey says, gesturing towards the Hauraki Gulf. ‘It has an almost cleansing effect.’” “Clambering out of Bailey’s cluttered ute, we take a tour of his work studio, a basic fenced-off yard filled with wooden palettes, half-finished sculptures, a battered stereo and workbenches scattered with chisels and power tools. Recent works have exhibited at the Venice Biennale, among others. ‘Art is still very much the lifeblood here,’ he says. Together with dozens of other artists also living on Waiheke, Bailey is gearing up for next year’s Sculpture on the Gulf event, a celebrated two-yearly fixture that’s expected to attract more than 30,000 visitors throughout six weeks from January.”