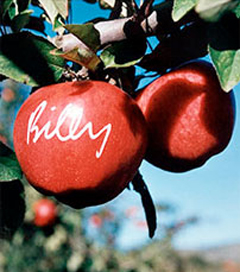 A survey exhibition of New Zealand artist Billy Apple’s work is planned for 2013 at the Auckland Art Gallery to celebrate the brand’s 50th year. The artist formerly known as Barrie Bates talked to Anthony Byrt about a career of collaborations and controversies that has consistently redefined art’s relationships with advertising, science and technology. Byrt discusses the artist’s attempt to commercially grow a Billy Apple® apple, and The Immortalisation of Billy Apple®. “We created a brand new cultivar, a new breed of apple with horticultural scientists,” Apple explains. The latter work uses Apple’s actual cells. “They’re in The American Type Culture Collection. A scientist can literally say: ‘I want some Billy Apple cells.’ They’re not coded for privacy like others.” Billy Apple lives and works in Auckland.