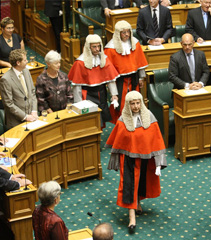 All in Good Time

New Zealand switched to proportional representation in 1993 and since then no single political party has been able to command a majority. New Zealanders have come to regard elections as a two-phase affair: first, the voting; and second, the period of government formation that follows afterwards, which often takes weeks. So are there are lessons to learn from New Zealand if this year’s UK election fails to produce a clear-cut result? Senior British civil servants appear to think so. In Wellington, for a recent gathering of public servants from Australia, Canada, Ireland, Britain and New Zealand, the British Cabinet Secretary, Sir Gus O’Donnell, paid very close attention to a document called the Cabinet Manual. It lays down the procedures and conventions which come into effect in the event of no single party gaining a majority. The New Zealand civil service does not like to use the terminology ‘hung parliament’ because it implies paralysis. It believes that it has come up with a workable model which ensures smooth transitions. After the 1996 election, the first under the new system, the period of uncertainty dragged on for more than a month, as the kingmaker, Winston Peters, of the New Zealand First party, continued parallel negotiations with the two major parties, National and Labour. Since then, the periods of governmental transition have been smoother and less troubled.