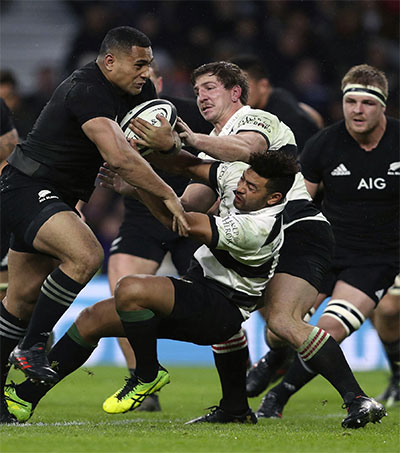 All Blacks Prevail Against Barbarians at Twickenham

“New Zealand were always going to be the winners of this frolicsome day out at Twickenham, no matter how the scoreline panned out,” the Telegraph reported after the All Blacks beat the Barbarians 31-22.

“The New Zealand union pocketed a few million as a match fee, the All Blacks got a useful run-out with their mix ’n’ match side ahead of three testing internationals to come in Paris, Edinburgh and Cardiff, while, with 13 Kiwis in Barbarian ranks, All Black head coach, Steve Hansen, was able to run the rule over a host of fringe candidates for the 2019 Rugby World Cup, even if the star-turn was a South African, Barbarians’ flanker Kwagga Smith.

“The crowd got their money’s worth, too, with switchback entertainment, full of thrust and parry, plenty of craft and graft, the Barbarians setting the pace as well as the tone with their vivid, concerted play only to be undone by a wham-bam salvo of three tries in six minutes just before the mid-point of the second half.

“‘We got caught up a bit in the festival of the occasion but we adapted,’ Hansen said. ‘This tour is all about growing for the future and we’ve started that. The Tests will be much tougher. It is totally different you go to Test level.’

“Barbarians head coach, [New Zealander] Robbie Deans, said: ‘The Barbarian spirit is alive and well. The jersey means a lot to these boys. We wanted them to play without fear and they did. This is right up there with Barbarians performances.’

“[In the second half] the All Blacks knew what they wanted – it was time for business. No more loose stuff, kick for position, pressure, force mistakes, keep it simple. The three tries in six minutes just before the hour mark were all textbook. Inside centre, [Ngani] Laumape smashed through [Richie] Mo’unga for the first, Sam Cane burrowed over for the next while a rear-field cock-up allowed hooker, Nathan Harris, to romp over. From 15-17 to 31-17 in the blink of an eye.

“The Barbarians refused to fade. Bridge latching on to a ball pin-balling around to race through, the mob-like celebrations of his team-mates showing how much it meant to them all.”

As part of their 2017 Northern Tour, the All Blacks will play France in Paris on 12 November before a second match with the side in Lyons on 15 November.