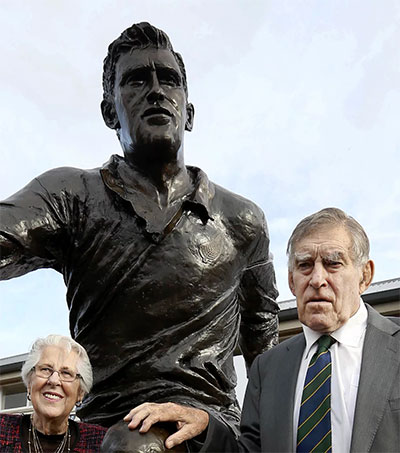 Colin Meads, the famously tough All Blacks captain hailed as New Zealand’s greatest rugby player of the 20th century, has died. He was 81. Cambridge-born Meads played 55 tests among 133 games for New Zealand between 1957 and 1971 – a prodigious number in an era in which the All Blacks seldom played more than four tests a year.

Hardened by his life as a sheep farmer in the rugged King Country district of New Zealand’s North Island, Meads was endowed with great strength, stamina and toughness. He famously once played an entire match with a broken arm.

New Zealand Prime Minister Bill English said he was not only a great All Black but a “genuinely good bloke”.

“He represented what it means to be a New Zealander. He was no nonsense, reliable, hard-working, warm and very generous with his time,” English said.

At 1.92m tall and weighing 100kg, Meads was considered a giant in rugby at the time, though he would be small for a lock by modern standards.

Meads was nicknamed “Pinetree” by teammate Kevin Briscoe during a tour to Japan by a New Zealand under-23 team in 1958 and the sobriquet stayed with him for the rest of his life, seeming to epitomise his stature and indomitability. His son Glynn, an able rugby player, was known as Pinecone.

Meads was regarded as New Zealand’s greatest All Black, even when players of the modern era such as Richie McCaw, who played 148 tests, surpassed his record for test appearances.

He was widely considered to embody the best qualities of an All Blacks player: he was tough, uncompromising, loyal and humble.

In a relatively young nation he also helped to define qualities, which were seen to be essential to the New Zealand character.

He was a man of the soil at a time when many All Blacks came from rural and farming backgrounds, before urbanisation greatly changed New Zealand’s demographic makeup.

Meads stayed on his farm near the small township at Te Kuiti until his death. In June, a bronze statue honouring him was opened in the town centre and he was present at the unveiling, his last public appearance.

Meads made his international debut against Australia in 1957, playing his first tests at flanker and No 8 before assuming his regular position in the second row. His selection in that position was almost unchallenged for the next 14 years.

He was part of one of New Zealand rugby’s greatest eras and his contemporaries included players such as Ken Gray, Brian Lochore, Wilson Whineray, Waka Nathan, Don Clarke and Kel Tremain. The undefeated 1967 team with which he toured Britain was recently voted the best New Zealand has ever fielded.

His biography Colin Meads, All Black was the best-selling sports book domestically of its time.