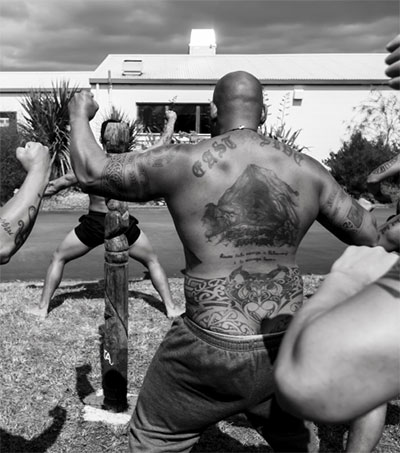 New Zealand has one of the highest incarceration rates in the Western world, and more than half of the prison population is Maori. Aljazeera journalist Aaron Smale goes inside to find out why and discovers that it is a reflection of our country’s deeper inequalities.

The expression “behind the wire” becomes common in subsequent conversations – shorthand for the world inside this prison, Smale begins.

The inmate’s arrival is announced by the prison guard walking ahead of him, ushering him into the room with a gesture that shows politeness but also the power one has over the other.

Department of Corrections rules mean that he can’t be identified, so we’ll call him Michael.

“With my crime, I didn’t know that my assault had gone so far – as in, it hospitalised somebody and eventually they passed away,” Michael says. “It was that major that I deserved to be where they wanted to send me, which was here.”

He was shocked at his six-year sentence – he expected longer. And he has sometimes been shocked at the sentences other inmates are serving compared to his.

A number of things about Michael’s profile are common to the other prison inmates.

Someone who knows more than most about Maori prisoners is Neil Campbell. He is from the Ngati Porou tribe and has worked in corrections for more than 20 years. For six years he was a prison guard at Paremoremo Prison, the highest-security facility for many of the country’s worst offenders, some of whom will never be released. He then worked in cognitive behavioural therapy and later as Maori adviser for Mount Eden Prison. For the past three years he’s been Director Maori at the Department of Corrections.

Of the cohort of Maori inmates he has seen, there are some familiar themes.

“They all have a history and a whakapapa of offending that goes right back to a very young age, and in a lot of instances, before they were born. Hence the generational problem.”

Campbell is quick to point out that understanding and analysing these factors is not to offer an excuse for their behaviour, but it does put their actions in some kind of context.

Judge Sir David Carruthers has worked in virtually every stage of the system. He has been the chief youth court judge, the chief district court judge and the head of the parole board. He is currently the chair of the Independent Police Conduct Authority.

He cautions anyone who wants simplistic explanations or answers to the problem of crime or its punishment. “If someone is giving you simple answers, you can be almost sure that they’re not true. There is no one simple answer to a complicated question like this, which other countries struggle with as well, particularly those with colonised populations.”

Since the early 2000s, five prisons have created Maori Focus Units – prison blocks within prisons that focus on addressing some of the issues that Maori offenders bring with them. For many, it’s a chance to learn some basic skills and to understand their identity as Maori in a positive light.

Campbell says the units offer a chance to address some of the deep-seated issues that Maori offenders often bring with them to prison.

“We have an obligation and responsibility as part of their sentence to work with them while they’re in our care to send them back to the community better off than they were when they came to us. So with better skills, better cognition, better reasoning, all the rest of it in the hope that it will reduce the likelihood of them reoffending.”

Campbell believes there are some offenders who should not see the light of day – he has dealt with many of them in the highest-security wing of Paremoremo Prison. But he says the vast majority have the potential to be rehabilitated and reintegrated. He says this is the hard option, but it is one that is worth pursuing, if only because it costs less in the long term.