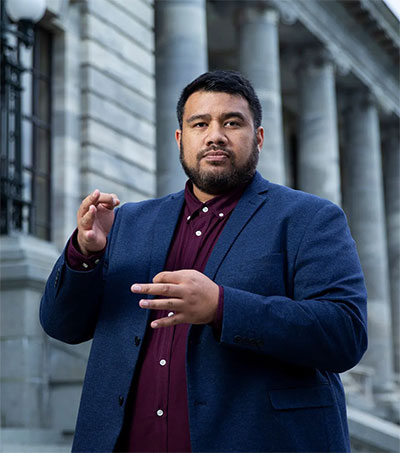 Alan Wendt is the first interpreter to be regularly employed by a New Zealand prime minister – and he has had a busy year, according to Dunedin-based journalist Eleanor Ainge Roy, who interviews Wendt for The Guardian newspaper.

When Wendt was a child, watching the Miss Universe pageant with his mother was an annual highlight, Roy writes. While she oohed and ahhed over the dresses, young Wendt was captivated by the interpreter who translated for the Spanish-speaking contestants.

“I thought it was complete magic, that he could render it so fast for a live TV audience. It was amazing,” Wendt says.

Thirty years on, Wendt, 40, has himself become a staple on New Zealand television screens as Prime Minister Jacinda Ardern’s sign language interpreter – the first ever employed by a New Zealand prime minister on a regular basis.

Interpreters were occasionally deployed during natural disasters by previous governments, but Wendt has become a permanent fixture on the television when Ardern requested last year that a sign language interpreter be by her side at her weekly post-cabinet press conferences. He was also called on during other major press conferences, including after the Christchurch massacre.

Wendt, a senior interpreter for Deaf Aotearoa, says his first post-cabinet press conference is etched into his memory. A stuffy and overheated room in parliament house. A pack of vociferous journalists. And the tense, tit-for-tat, rapid-fire dialogue that defines the prime minister’s public tussle with the media every week, which is livestreamed on Facebook and other platforms.

“What I remember most is being nervous … I did feel the pressure,” says Wendt, who also speaks Samoan and German.

Wendt says it is “impossible” to interpret multiple voices overlapping, so when the media form a “united front” to press the prime minister on certain issues he is often playing catch up, and finding ways to insert questions after they have already been asked, or answered.

“It’s a bit like juggling while doing gymnastics, cognitively. So it’s quite a heavy cognitive load to carry. At the end of it, I am exhausted. I have times where I hop in my car and fall straight asleep, because I am just like: ‘aghhh that was so much’.”

Wendt’s high-profile work has given him a rare insight into the prime minister.

“She is quite accessible as a speaker. She is speaking about quite complex ideas, but for me at least it is never in a way that is impenetrable. And that certainly makes my job easier. The craft and the care with which she does talk makes it easier.”

When emotions run high – such as after Christchurch – Wendt says he uses his face to convey meaning; reflecting Ardern’s emotions, and on some days, the emotions of a nation.