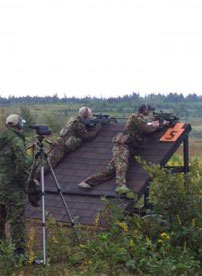 Aim and Fire Over Canada

A sniper cell from New Zealand was one of 27 teams taking part in the annual Canadian International Sniper Concentration at Canadian Forces Base in Gagetown. Captain John Bourgeois, the officer in charge of the Canadians, said a sniper’s job is to spot and pick off enemy soldiers from concealed positions. “He or she can remain there for extended periods of time under diverse conditions and kill select enemy targets at long ranges,” Bourgeois said. Staff Sergeant Matt Bedford of the New Zealand Army said many things can be shared between the Canada and New Zealand as a result of such gatherings. Bedford said New Zealand doesn’t use some of the calibres of ammunition being used here, and that skill is something they’re picking up from local snipers. “What you can probably take from us is that New Zealand is obviously a different country, a lot more hilly or rugged terrain, and we do a lot more field work as opposed to the sort of shooting that we do here,” he said.