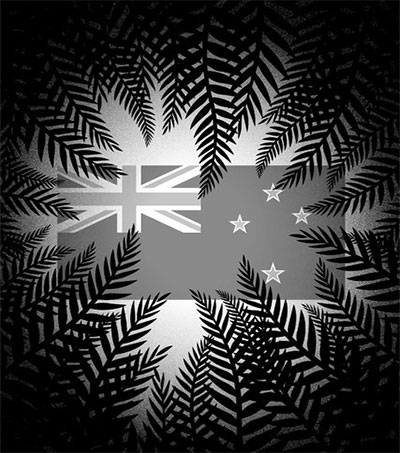 Steve Braunius Cuts to the Chase about the Flag

In an opinion piece for the New York Times, New Zealand author and journalist Steve Braunius dives into the flag debate as the nation votes in a second referendum on whether to retain the existing New Zealand flag or change to the preferred alternative design selected in the first referendum. Voting closes on 24 March.

“New Zealand is as beautiful as it is isolated,” Braunius begins. “We live a long way from anyone and anything, and we like it that way. We have almost four and a half million people and more than five million dairy cows. We have snow-capped mountains and deep dark woods where hobbits roam, as directed by Peter Jackson in his interminable Lord of the Rings movies. We sing (Lorde) and act (Russell Crowe) and throw stuff (rugby balls).

“The rest of the world rarely notices our country, but this month everyone – well, some people – seems to be taking note. Our green and pleasant archipelago is heading to the polls for a national referendum.

“New Zealand’s current flag was adopted in 1902. Our Olympic athletes compete under it; it flies atop our Parliament. It has served us in two world wars and is carried at sombre dawn parades up and down the country when we commemorate those who died in combat in a moving ceremony that concludes with the line: ‘We will remember them.’ These are the kinds of connections that New Zealanders want to keep.

“But a corner of the flag features the Union Jack, a reference to our former status as a British colony. Critics – and [John] Key is hardly alone on this, although neither is he surrounded – point out that this is an anachronism. It’s the silver fern that really is our national symbol, an emblem from nature, proudly displayed on the jersey of our Godlike national rugby team, the All Blacks.

“One of the two silver fern beach towels designed by Kyle Lockwood won the public vote to go head to head with our old flag. Which looks set to win in the referendum? It would be lame to say the answer is blowing in the wind, because the answer appears to be fairly obvious. In a recent opinion poll, 63 per cent wanted to keep the current flag. Key must be tearing his hair out – or someone else’s.”

Braunius is the author of The Scene of the Crime, published in 2015.