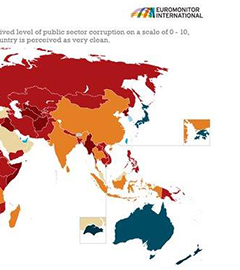 New Zealand has been declared the least corrupt nation on earth, equal with Denmark. Rounding out the top four are usual Scandinavian suspects Finland and Sweden, according to Transparency International’s 2013 Corruption Perceptions Index. New Zealand and Denmark both scored 91 on the CPI criteria, which is based on perceptions of political and administrative corruption.

While former SFO chief Adam Feeley has recently publicly said that fraud, a form of corruption, is a growing problem in New Zealand and ACT leader John Banks faces a private prosecution for knowingly filing a false election return, public perception remains of a relatively honest and law-abiding public sector. To be fair, compared to the contenders, it is.

The most corrupt nations, according to the index are Somalia, Korea and Afghanistan.

The most egregious case of clear-cut corruption in recent New Zealand history was in 1997, when former Auditor General and ACC boss Jeff Chapman was convicted of 10- charges of fraudulently using documents for a pecuniary advantage of $54,594.

It was a relatively small amount but caused a huge scandal.