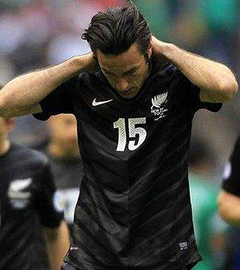 New Zealand football fans have a black sense of humour honed by decades of disappointment and only leavened by occasional World Cup success. So, the joke doing the rounds – “Want to hear something really funny? The All Whites now only have to beat Mexico 4-0” – is not entirely unexpected.  Even Australian media, ever ready to put the boot into a Kiwi sporting side, struck a mournful note in reporting news of New Zealand’s 5-1 thrashing by Mexico at the Estada Azteca.

And the Sydney Morning Herald is right; New Zealand’s World Cup hopes are in tatters.

The All Whites play Mexico at Westpac Stadium on Wednesday, 20 November, and have to win 4-0 to qualify for the World Cup in Brazil next year.

A snowdrop’s chance in Hell, as the saying goes. Mexican fans certainly know it. When Oribe Peralta scored his second goal, 105,000 voices began chanting the traditional farewell song, Cielito Lindo. It was directed at the dejected New Zealanders.

By the time the fifth goal was engineered, it was, “We’re going to the World Cup”. In a search to find the silver lining, the SMH commented: “FIFA will be thrilled, for the Mexicans are regarded as the best and most colourful travelling fans in world football.”