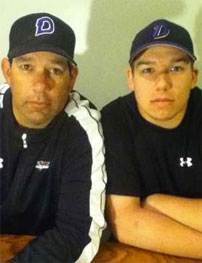 New Zealand father and son Michael and Mitchell Roberts are the winners of the Wisconsin Green Bay Press-Gazette’s father-son look-alike contest beating 3 other participants. You know it by their faces, but not by their voices. Michael’s thick but whimsical accent is distinct to his native New Zealand, and it’s never more obvious than when he ends a salutation with “mate.” Mitchell’s 17-year-old voice is smattered with a Wisconsin dialect as well as a faint reminder he spent his first six years in New Zealand. “We really didn’t think we had a shot at winning, because when we looked at [the entries online] we saw a lot of good ones,” Mitchell said. “I was pretty happy, but I was really surprised.” Mitchell is a three-sport athlete at Denmark High School. Michael coaches the women’s team at the University of Wisconsin-Green Bay.