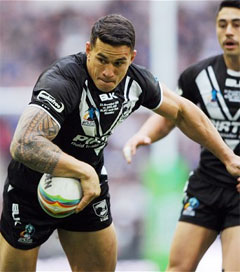 New Zealand forward Sonny Bill Williams, 28, has been voted rugby league’s International Player of the Year, the first ever non-Australian to take the award.

Williams was reduced to tears when his team-mates performed an impromptu haka after he was named the world’s best rugby league player.

Scooping rugby league’s International Player of the Year award marks a sensational return to the 13-man code after a five-year absence, during which time he played 19 Tests for the All Blacks to help them win the 2011 World Cup and also became New Zealand’s heavyweight champion.

“I wouldn’t say I was a world star but I’ve been very blessed to have been in quite a few amazing teams with some amazing players and amazing coaches,” Williams said.

He beat off competition from Kangaroos star Greg Inglis and Scotland playmaker Danny Brough to win the award.