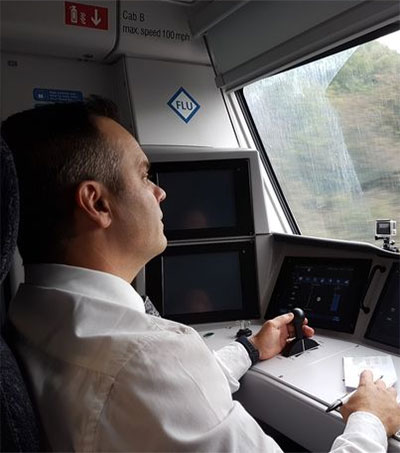 Will Paton in the Front Seat of New UK Trains

It’s hard to imagine being responsible for the safety of 1700 lives, but that’s what New Zealander Will Paton faces every day, when he steps into the high-tech cab of his train.

Paton spends up to eight hours a day driving the sleek new Class 700 trains for Govia Thameslink Railway (GTR), which will soon be pulling into Cambridge station.

The trains will be serving Cambridge and Peterborough as part of the northern extension of the Thameslink project, which will see commuters in the county able to travel directly to central London, Gatwick Airport and Brighton.

A driver with over four years’ experience, he spoke to the Cambridge News while travelling from London St Pancras to Gatwick Airport on board one of the new trains, which already serve London and the south of England.

He said: “I have been driving since they came out, over a year ago, and these are mostly computerised now, so it’s a big change.

“Previously we had circuit breakers, and we had to learn where they were, but this has a computer that tells you.”

A further change from trains of old is Paton’s seating position – rather than sitting on the left hand side, he spends his day in a central position, giving him the clearest view of the line ahead.

For Paton, who is based in Bedford, and could soon be pulling into Cambridge, the extensive training was all worthwhile.

He added: “I am ex-military and an ex-firefighter, and I had to work twice as hard to become a train driver, the amount of knowledge you have to have is incredible.”