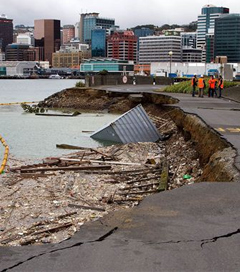 Much of Wellington’s CBD was closed on Monday as engineers assessed building for structural damage following a magnitude 6.5 earthquake struck on Sunday evening. While the New Zealand Parliament building and Beehive did sustain some damage, no injuries were reported and Prime Minister John Key advised that the nation’s capital did not sustain any major damage. The quake, which had people diving under desks and doorways, was centred in the Cook Strait, 17 kilometres deep. The quake followed a series of shakes that have rattled the lower North Island since the previous Thursday. Additional damage included damage to building exterior, broken windows, damage to the road leading to the port (pictured) and loss of power to outer Wellington suburbs and to Seddon, a small town closest the centre of the quake, was still without power on Monday. Wellington sits on a geological fault-line that if triggered has potential to be one of New Zealand’s deadliest disasters.