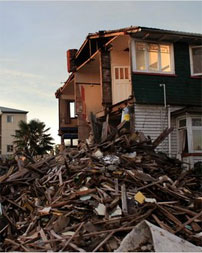 “The once bustling central business district resembles a wasteland,” Jonathan Hutchison reports for The New York Times. “Office furniture can be seen sitting inside partially collapsed buildings. Piles of bricks and steel lie along the closed, empty streets. Ten months after a powerful earthquake hit New Zealand’s second-largest city, residents have experienced more than 73 aftershocks. It is the second deadliest natural disaster ever and has also become the costliest natural disaster in New Zealand history. Engineers have been surveying land throughout the city to determine which parts are too dangerous to live and build on for the foreseeable future. The government has offered to buy houses and land in these red zones, a deal that could cost up to $685 million. More than 5 houses are affected so far. The continuing aftershocks are an unpleasant but unavoidable reality that is likely to persist for some time. Scientists estimate that in about a year, they should slow to about one a month.”