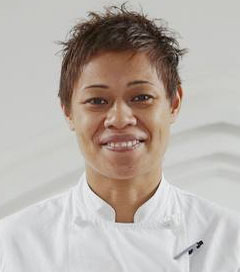 New Zealand chef Monica Galetti moved across the world for the chance to work with world-renowned Michel Roux Jnr at London’s Le Gavroche. Galetti has now been there for 10 years and is senior sous chef to Roux at the two-Michelin-starred restaurant. She has appeared as a judge on MasterChef: The Professionals and written a book, Monica’s Kitchen. She is also currently helping raise awareness of the benefits of buying organic for the Organic Naturally Different campaign. Galetti features in the The Independent’s column My Life in Food. The Independent asks: “If you had only £10 to spend on food, where would you spend it and on what?” Galetti responds: “I’m a chocolate fiend, so I would just buy the best dark chocolate available. A close second would be a great quality organic green tea, which I also drink in vast amounts. I always buy organic and love farm shops. Some people think that organic is more expensive, but if you plan wisely, you can make ingredients go further. For example, use the whole chicken – bones for stock, things like that.” Galetti’s favourite restaurant? “El Celler de Can Roca in Girona [Spain] is my absolute favourite. I admire the Roca brothers and how they have worked together as a family to create that inspiring and unique restaurant. Not only is the food amazing but it has the largest wine cellar, with more than 60,000 bottles.” “Who taught you to cook?” “I have to thank my mum for teaching me the basics of Samoan cooking and starting my culinary journey. And of course Michel Roux Jnr. I’ve worked with him at Le Gavroche for 10 years and every day I learn something more.”