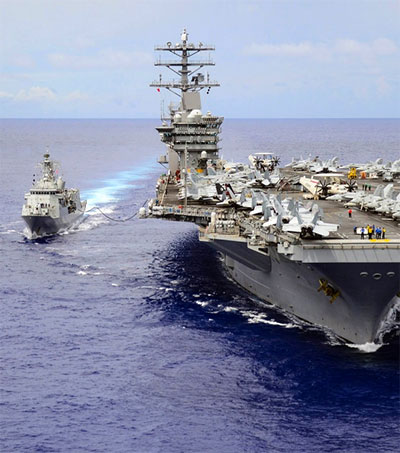 This was Schroeder’s first time on a different ship besides Nimitz, “let alone one from a different country”, he writes for the Lenmoore Navy News.

“The accent. This was the very first thing that hit me. It played right into my imagination, and perfectly exemplified what I thought a New Zealand sailor would sound like. It rang as a mix between dignified British and laid back Aussie,” Schroeder describes.

“We walked through the passageways of the ship, and my eyes darted in every which direction. It was immaculate. This was the doing of all the sailors that were out and about cleaning when I arrived. They were all hard at work, but within the same moment of time, I felt their warm, inviting, relaxing faces hit mine. I could feel the warmth of each individual and the welcome they were extending to me with their body language.

“We headed to the bridge, and once again the ease and relaxed attitude pulled me into the space. It was after more introductions that it finally hit me. ‘Not a single person here has referred to me by my last name.’ Every person I met in my short time aboard simply called me Cole, which really only added to the feeling of family.

“Everything was so different here. They have carpet in their berthing!” Schroeder exclaims.

“Next stop on the tour was dinner. I couldn’t believe it. After sitting down with my plate, I decided to take a picture as evidence to everyone back on the ship. After the first couple [of] bites, we all extended our love for their food. When one sailor explained that he had never had chow like this on the boat, the same befuddled look we saw so many times throughout the day resurfaced on a New Zealand face. An explanation was once again given on the miscommunication. Like so many other navy terms, chow is simply called scran in the New Zealand Navy.”