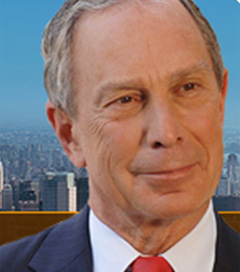 Two weeks off the grid

Newly-former Mayor of New York City Michael Bloomberg and his companion Diana Taylor will spend two weeks holidaying in New Zealand and Hawaii at the commencement of 2014, after 12 years helming the western hemisphere’s capital, and after a month of valedictories assessing his performance as positive plus to overwhelmingly positive. Golf is on his agenda in New Zealand for his first vacation in 12 years. Mayor Bloomberg told Forbes that he and his companion Diana Taylor would be joined on the golf course – “on a good day I shoot a few strokes under 90” – by the billionaire hedge fund manager Julian Robertson, owner of several luxury lodges and vineyards in New Zealand.

“Ms. Taylor, who in more than a dozen years as Mayor Michael R. Bloomberg’s quietly glamorous sidekick has had plenty of time to adapt to the spotlight. Yet even now, as she winds down her tenure as the de facto first lady of New York City — a period during which she raised her political and social profile and redefined the notion of a trophy date — Ms. Taylor remains an object of avid speculation.

“Despite her achievements, she seems unburdened by a sense of entitlement. Her close friend Oscar de la Renta characterized her as candid, unpretentious and direct. “What you see is what you get,” he said. “She doesn’t even try to project herself into something she’s not.” Her self-effacing manner is a well-honed shield. “Socially in this position you have a really good sense of who you are, what the seat is and what is you,” Ms. Taylor said. “People are going to get into trouble if they think they are the seat.”

“If she is feeling the heat of such scrutiny, Ms. Taylor, who is 58, gives no clue. Her turnout, a square-neck Oscar de la Renta dress and cropped sweater in wrenlike shades of gray and brown, offered a degree of protective coloration. True, she cultivates a spontaneous and down-to-earth aura, her eyes crinkling as she smiles, chattering as delightedly as a girl about the pumps she was wearing — a bargain, she said, custom-made in Hong Kong. And yes, she has been known to answer her own phone, dispensing with the multiple aides or publicity personnel one expects to find helicoptering over her. No question, she has maintained an edge.”