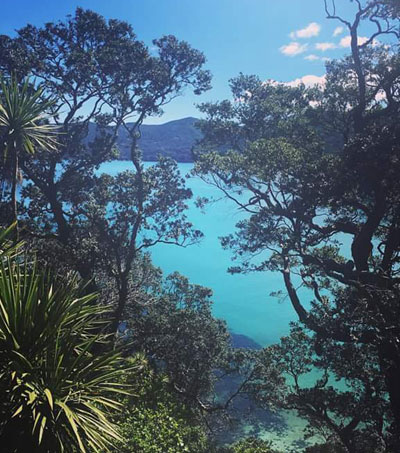 New Zealand’s “Great Barrier Island is a gorgeous unspoilt spot where native forest runs down steep slopes to beautiful isolated beaches and walking trails interconnect the paved road to a paradise of hot mineral springs, perfectly preserved wetlands and stunning views,” writes Susan Bredow for Perth Now. “Waiheke, on the other hand, is about food and wine and it presents both to an international standard with that laid-back style typical of New Zealand.”

“There are some who joke that going to New Zealand is a trip back in time but this is absolutely true of Great Barrier Island,” writes Bedrow.

“The island’s east coast is on the edge of the Pacific Ocean and the white-sand beaches are shaped by great waves rolling in uninhibited by any land mass between here and Chile.”

Many of the birds, reptiles and amphibians living on Great Barrier Island are now extinct on New Zealand’s mainland.”

Waiheke Island “feels a long way away from a metropolis” even though it is located just 18km or 30 minutes by ferry from downtown Auckland.

Known for its many boutique wineries, Waiheke Island today “is an internationally-renowned tourist destination that has been voted the world’s fourth best island (by Conde Nast) and rated as one of the best regions to head to in 2016 (by Lonely Planet).”