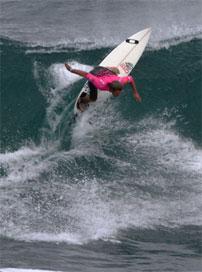 Raglan’s Billy ‘The Kid’ Stairmand knocked out American 1-times world champion surfer Kelly Slater from the Telstra Drug Aware Pro at Surfers Point in Western Australia inflicting the shock upset on the superstar after a 16.5 to 15.5 result in three to four metre waves. Stairmand, ranked 58 in the world, clinched the round-of-24 matchup with a 9.-rated ride after both surfers had scored 7.5 in their first attempts. Slater could only manage an 8. with his final attempt, handing the young New Zealander the biggest win of his career. Stairmand is no stranger to success having won a six-star event on the secondary tour in Spain late last year that signalled his potential. Stairmand said: “Beating the best surfing athlete in the world is pretty crazy. Just surfing with him is amazing so it was pretty much a dream come true.”