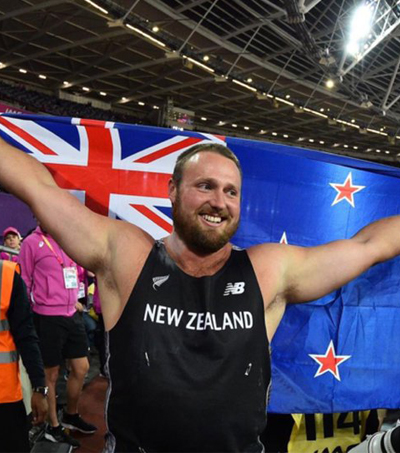 “Having watched compatriot Valerie Adams dominate women’s shot for a decade Tomas Walsh struck a blow for New Zealand’s men on Sunday when he took gold in the world championships with a superb series of throws,” writes Christian Radnedge for Reuters.

“Walsh’s medal was the first of any hue for a New Zealand man at the worlds, coming a year after he won Olympic bronze in Rio.”

“What a night last night, words can’t explain what I’m feeling. Thanks for all the messages of support,” tweeted the New Zealander.

“This gold medal is something that me and my team behind me have been working on for so long,” said the winner. “It feels pretty good,” Walsh said, as reported on Athletics Weekly.

All of his “six efforts were well over 21 metres in a remarkable display of consistency.”

“Walsh becomes New Zealand’s third athletics world champion – and the third Kiwi thrower to stand atop the podium. Beatrice Faumuina won the discus world title at Athens in 1997, while Dame Valerie Adams won four consecutive world shot put crowns in 2007, ’09, ’11 and ’13, as well as a silver in ’05,” as reported in Stuff.