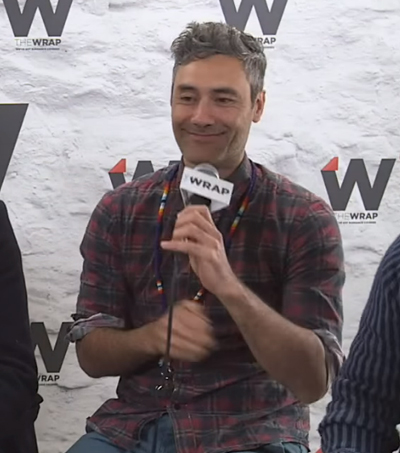 In October New Zealand filmmaker Taika Waititi “landed the biggest job of his career when Marvel handed him the reins to their superhero threequel Thor: Ragnarok,” writes Jen Yamato for The Daily Beast.

The  ‘What We Do in the Shadows’ helmer opened up about his top-grossing Kiwi film of all time Hunt for the Wilderpeople, and why movies need better roles for women.

Waititi emphasized that it would not be a ‘What Thor Does in the Shadows’.

“It’s not gonna be like that, mate. I’m sorry! It’s not like broad, stupid comedy, like suddenly, ah! We’re going to do Dumb and Dumber with Thor! It’s easygoing, human comedy. It’s human humor,” said Waititi.

Human humour is a specialty of Waititi’s films. Wilderpeople, “a loose adaptation of author Barry Crump’s novel Wild Pork and Watercress” is “peppered with colorful detail and memorably funny dialogue” and “is buoyed by a great sense of heart and warmth,” according to the article.

“The book was written in 1984 or something. There’s no comedy in it, and there’s no social welfare worker character, or car chases, all that stuff. I wanted to show a kid that was just completely out of his element, who was trying to hide who he really truly is. I feel like a lot of kids [can relate], especially New Zealand kids who are into this ‘gangsta’ culture,” said Waititi.

It’s the “unique brand of cross-cultural humor” that “makes Waititi’s Thor sequel seem promising, even in the sea of superhero movies made under strict Marvel control.”

When asked how he got the job, Waititi said:

“I had to go in and talk to them about the film and just get to know them. You have to basically prove to them that you’re not a psycho who just made their own IMDb page. That you’re a real person and know what you’re talking about. I think it’s more about your personality and if you can work with these people. I think that’s secretly what it’s about.”

About his upcoming Marvel movie, Waititi said that it will “add a much-needed inclusiveness to the Marvel pantheon.”

“Everyone’s aware of the need for female characters. But female representation is something I feel is even still behind in the conversation about representation. It’s something that’s equally important to my mind,” said Waititi.

“I want to see more females onscreen and not just dudes. There’s nothing wrong with that, but there’s a lot of it in the world. We need more representation of all kinds,” he said.

The Kiwi filmmaker said that he was humbled by the thought that when he was growing up, he never dreamed a career in film was even possible, as reported in the article.

“There was never any consideration that you could be a filmmaker or even an actor, or even work on a film set. That wasn’t even a world that existed when I was growing up, and now it’s thriving and we get opportunities to let indigenous youth be part of these worlds—and that, to me, is at least some sort of success.”