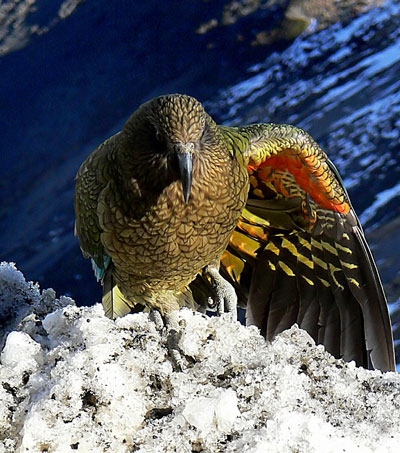 The New Zealand kea, the world’s only alpine parrot “is at threat of extinction in New Zealand as numbers plummet in the face of threats from non-native predators and human development,” writes Eleanor Ainge Roy for The Guardian.

“Kea are one of the most maligned of New Zealand birds, as well as one of our most loved,” said Tamsin Orr-Walker, chair of the Kea Conservation Trust.

“One of the most interesting things about kea is they are one of the few wild species that seek out humans. That is really rare, and it is that inquisitive nature that is getting them into trouble because a lot of the ways humans interact with them is endangering their survival.”

“Recent studies from the Kea Conservation Trust have found two-thirds of all chicks never reach fledgling stage, as their nests are ground-dwelling and they are eaten by stoats, rats and possums,” as reported in the article.

According to Orr-Walker the threat to Kea came from introduced species, lead-poisoning from old-fashioned alpine dwellings such as huts and shearing sheds, and from their interactions with humans.

“We can educate people about how to behave responsibly with kea, and we can enclose protected environments, but the lead poisoning is hard,” said Josh Kemp, a kea expert at New Zealand’s department of conservation.

“And we can’t afford any Kea losses at this stage, they are too vulnerable.”