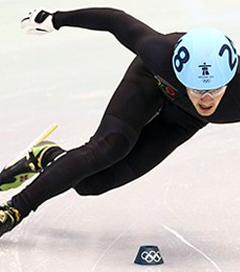 Skjellerup to Make a Stand For Equality

New Zealand speed skater, Blake Skjellerup, intends to throw the spotlight on Russia’s anti-gay propaganda laws if he is selected to compete in the 2014 Winter Olympic in Sochi, which would also make him the first openly gay athlete to be competing in the games.

“I will be myself in Russia,” Skjellerup, 28, said. “And at the moment that is illegal. My goal is to inspire, encourage and offer support to LGBT [lesbian, gay, bisexual and transgender] people in Russia.

“I would love for Putin to get to know me. I would tell him how much I disagree with his oppressive anti-gay propaganda laws, and that he has a responsibility as the president of Russia to represent all the people of his country.”

“The anti-racism movement has made great strides in recent decades, but the LGBT movement is a long way behind. There is a lot of hate. I want to change that.”