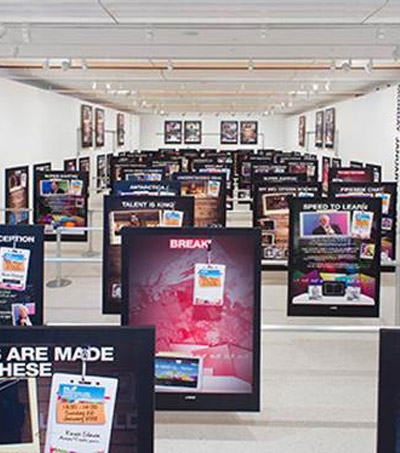 Denny’s work often refers to the psychology and abstract language of the new media economy, invoking “clouds” of big data and the constant pressure to “update” our lives.

The Aucklander’s “work deals in the here-and-now (everything from TED talks to “cloud” computing to startup culture) and the show promises to make you stop and think the next time you swipe to update” according to Vogue, which has featured his exhibition in their Spring Art Guide: The 10 Must-See Shows of the Season.

The Berlin based artist uses an approach that is “sculpturally holistic, seeking and building upon analogous connections between the various formal aspects of his work” according to Ocula.

Simon Denny presents The Innovator’s Dilemma at MoMA PS1, from 3 April until 7 September 2015. In 2015, he will represent New Zealand at the Venice Biennale.