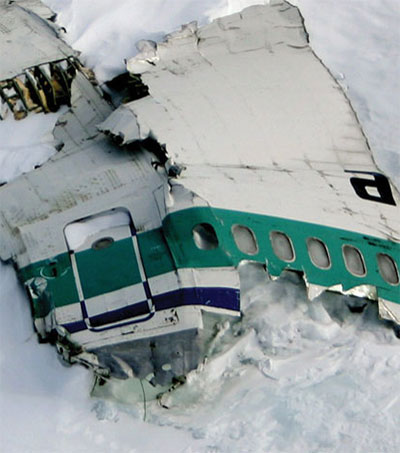 In the Shadow of the Mt Erebus Disaster

It remains New Zealand’s worst peacetime disaster. On 28 November 1979, a sightseeing aircraft carrying 257 people crashed head-on into the side of a volcano in Antarctica. The tragedy of flight TE901 was a shock for New Zealand, affecting almost everyone in the country in some way, and led to years of investigations and a bitter blame game. The BBC reports on the legacy of the disaster 40 years on.

“It came at a time the relatively young nation was in a crucial period of finding a new narrative for its identity,” explains Rowan Light, a historian with Canterbury University.

“In the 1960s and 70s the old narrative of being a progressive outpost of the British Empire had fallen to pieces or was just not making sense anymore,” Light says.

But the country was trying to find its feet. Technological advances were a big part of that new path, infrastructure was key to the national story of settling, conquering and gaining control over the land. And reaching out to Antarctica, about 4,500km to the south, fitted perfectly into that story.

The legal battle came swiftly and was a second blow after the crash itself. New Zealanders were shocked by the failure to properly identify what had happened and by the bitter accusations.

For the post-war generation, it was the biggest tragedy they’d witnessed their country go through and there’s a lingering sense that it might have been where the young nation lost its innocence, its clear sense of direction, stability and trust in the established order.

Despite this, there is as yet no national memorial to the victims. A cross and a koru – a stone coiled fern – have been placed near the crash site and Ross Island has been witness to several commemoration events by the victims’ relatives, but the debate of what form a memorial should take and where it would go has generated its own frustrations.

Earlier this year, New Zealand approved a plan for a structure in Auckland, which Prime Minister Jacinda Ardern said “reflects the enormity of the tragedy and provides a strong sense of connection and loss”.

Partially covered by snow, the wreckage is a silent tribute to the flight of a lifetime that ended in tragedy.