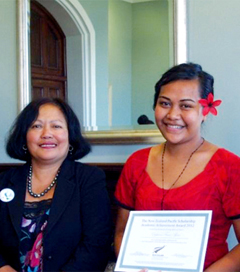 Outstanding Samoan student Epifania Afano’s winning of the first ever New Zealand Pacific Scholarship Academic Achievement Award was recognised by the Samoa Observer. Epifania is a received her award at Victoria University, Wellington. Epifania achieved the highest grade point average of all NZPS scholars in her first year of a Bachelor of Commerce majoring in Information Systems, reported the Observer. Anna Pasikale, a Deputy Director in New Zealand’s Ministry of Foreign Affairs and Trade (MFAT), presented the achievement award. ‘We are delighted to present this award to Epifania and hope that it encourages her to believe in her strong ability going forward into her second year,’ Ms. Pasikale told the Observer. The Pacific Scholarship Academic Achievement Award is part of the New Zealand’s overseas development assistance fund, which provides scholarships for almost 180 students from developing countries to study at Victoria. The award was initiated in 2012 to promote and to recognise academic excellence among scholarship recipients from the Pacific.