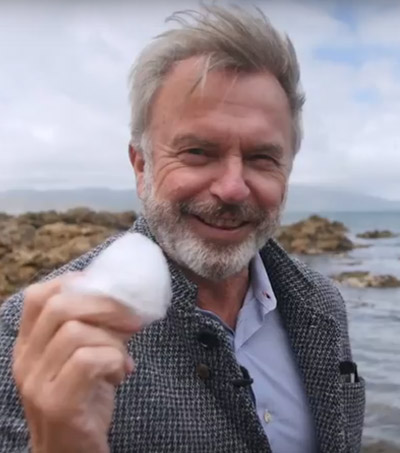 Actor Sam Neill is the latest recruit on board Greenpeace’s campaign against plastic bags. He joins Dr Jane Goodall and former NZ Prime Minister Helen Clark in the quest to ban single-use plastic bags, “something tens of thousands of New Zealanders have been pushing for, too,” as reported in an article on Look to The Stars.

“Neill stars alongside Auckland marine biologist Dan Godoy in a satirical clip for Greenpeace promoting the virtues of the humble plastic bag,” as reported on Stuff.

One of the major campaign successes so far has been “getting New Zealand’s two largest supermarkets – New World and Countdown – to announce a ban in their stores.” Now Greenpeace are calling for “a nationwide ban to make sure plastic bags can no longer find their way into our oceans, devastating marine life.”

“At noon on Tuesday, 27 February, Greenpeace was joined” by Goodall and Clark, along with members of local councils, businesses, non-governmental and community organisations, and scientists” to present a letter to Ministers as well as a petition signed by more than 61,000 New Zealanders – all asking for a change in law.”

“The banning of single-use plastic bags from stores, communities, and the environment would be a big step in the right direction towards achieving the targets of sustainable development goals, a step where we are well behind many other countries which are enacting legislation,” said Clark, as reported on Newshub.