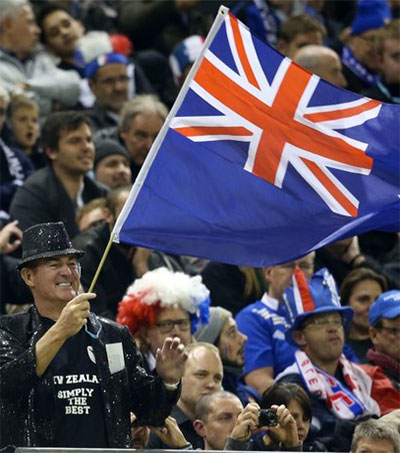 Replacing the Union Jack Flag, but With What?

The idea of replacing New Zealand’s flag, a blue banner with Britain’s Union Jack in the upper left quadrant and the four stars of the Southern Cross in red on the right, has percolated for decades, with new proposals for changing it cropping up every few years. But none has gotten as far as the current one, New York Times correspondent Michelle Inn writes.

Polls consistently show that 60 to 70 per cent of New Zealanders are content with the flag they have, according to Barry Milne, a research fellow at the University of Auckland.

The attitude of Tom Dinning, 73, a retired garden centre manager from Hamilton, was fairly typical: “If it ain’t broke, don’t fix it.”

New Zealand voters will be the ones to decide.

In May, they were asked to submit designs for a new flag. By the mid-July deadline, the government had received 10,292 submissions.

A panel of 12 New Zealanders chosen by politicians from six political parties reduced the list to 40 and, after a period of public discussion, trimmed it to four.

Three of the designs featured a silver fern. The fourth was a koru, based on an unfurling fern frond.

But strong public criticism of the narrow choice led the government to add a fifth, non-fern option. This design, known as the Red Peak, is also based on a Maori motif, representing earth, mountains and sky.

Voters will rank the five flags in a mail-in vote during three weeks starting in late November. In March, a second postal referendum will pit the most popular new flag against the incumbent.